The Highmark Caring Foundation has been a champion for children since 1985, working to identify the unmet needs of children in our community and create innovative programs to meet those needs. 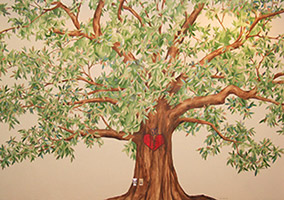 The Caring Program for Children — health insurance for uninsured children

Decades ago, "uninsured children" were not an issue. Millions of children went without needed health care because they didn't have health insurance; families worried every day about the one accident or sickness that could bankrupt them — but not many people noticed it and even fewer tried to do anything about it. Uninsured kids were not yet on the national radar.

The Caring Foundation began in 1985 in order to respond to the needs of uninsured children falling through the cracks of the health care system by initiating the Caring Program for Children, the first program of its kind in the nation.

The program was financed through community contributions, matched by Highmark. Thus, every dollar received from the community was doubled and went to health care costs of the children.

In 1992, the Children's Health Insurance Program (CHIP) of Pennsylvania was signed into law. CHIP was modeled directly on the Caring Program for Children, although the infusion of public dollars dramatically expanded the number of children who could be reached.

Pennsylvania's Children's Health Insurance Program was, in turn, a model for the federal CHIP program. Every year, millions of uninsured children across the country received health care coverage through CHIP.

The Highmark Caring Place, A Center for Grieving Children, Adolescents and Their Families

During the years that the Caring Program became the model for Pennsylvania's Children's Health Insurance Program, a group of nurses working with young cancer patients at Children's Hospital of Pittsburgh looked for programs to help the siblings, children who had experienced the death of a brother or sister — or of a father or mother as well. They found that there were no such programs to refer the children to.

The first groups met in borrowed space at a school building until December of 1997 when the state-of-the-art Caring Place was dedicated in the middle of downtown Pittsburgh. This facility, drawing on the best practices of grieving centers from across the nation, made a statement by its very presence: "Children matter and the grief of children matters."

Through continued support from Highmark and the community, the Caring Place in Pittsburgh was so successful that a second facility was opened in 2001 in Erie while a third Caring Place was launched two years later just across the river from Harrisburg in Lemoyne. In 2009, a fourth site began helping grieving families in the fast-growing Warrendale region north of Pittsburgh.

The Caring Place peer-support group model was expanded to apply in school settings in 2014. Within the schools, co-facilitated by trained school personnel, peer support groups come together to provide help to grieving students within the school day, students who often would not have any other option for support.

The larger mission of the Highmark Caring Place is to raise awareness in the community of the needs of grieving children and how to respond to them. Beyond peer support groups, the Caring Place provides referral services, adult telephone support and educational programs and resources for grieving children and families as well as consultation services, educational presentations and resources for schools and other professionals in the community who work with children.

The Caring Place also offers its expertise to other grieving centers throughout the state, providing them with training, guidance and support as they work to help grieving children in their own neighborhoods and communities.