"That first year after my husband died, I was lost in the flood of my grief, and I thought it would never get any better. Then, over time, I realized that it was a little better. It didn't hurt as much. So I thought I was finally over it — over the worst of it anyway. And then Roger's birthday came around again. And here I am right back in the flood. I don't know what's happening. Nothing makes sense."

The pieces of grief overlap and mix together, without a real ending point for any of them. Instead of a straight line through grief, it feels much more like we're going in circles. We experience the most intense feelings, which then back off a little — for a while. And then the intense feelings return.

But even when we feel many of the same feelings again and again, there is a change, an improvement, over time. We're not just going in circles, getting nowhere. We might be going in and out of more and less intense feelings, but this improvement over time produces a spiral path for our grief.

Many things can trigger a return to intense grief, including special days, something we see or hear, taste or smell, along with developmental issues, especially for children. Understanding grief as a spiral can help us to understand the changes that occur, and can allow us to begin to manage our grief.

Grief — not a series of "stages"

When we grieve, we don't travel through one "stage" after another, finishing one and then moving on to the next, until the whole process is finished, and the grief is over with.

From listening to people at the Caring Place, we know this is not the way most experience grief. The feelings and experiences overlap and mix together, and there is no final ending point.

Instead of feeling like we're moving on some straight line through the grief, we feel much more often that we're going round and round.

"For in grief nothing 'stays put.' One keeps on emerging from a phase, but it always recurs. Round and round. Everything repeats. Am I going in circles, or dare I hope I am on a spiral?"

Grief as a spiral

As we grieve the person who has died, we might sometimes feel some of the most intense feelings we have ever experienced. At other times the feelings aren't as strong. We might feel like we can finally catch our breath. But then, sometimes without warning, the intense feelings flare up again, and we feel like we're right back where we started.

One important thing to remember is that as time goes on, our grief won't just end. There will be some days, even years later, when — who knows why? — we'll feel our grief as strongly as we did in the beginning. Just when we think it has found a comfortable place in the background of our lives, it spirals around again to the forefront.

But, the second important thing to remember is that when we feel these strong feelings again, that doesn't mean we're back at the beginning. We've traveled a long way between now and the beginning. We've learned a lot and grown a lot. We've changed. And this change can lead to a sense of hope.

Knowing that we will sometimes come around into those painful feelings again can help us to not be so surprised when it happens. As we learn what triggers these feelings, we can also begin to plan and prepare for when it happens. 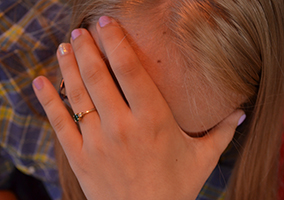 All of us have difficulty facing the intensity of grief indefinitely. As the months pass and we move upward on the spiral, the grief softens in intensity — not in a straight line, but following the circular path of the spiral.

Many things can trigger a return to intense grief, sending us to the "front of the grief spiral" — a birthday or other holiday; the anniversary of the death; seeing some clothing once worn by the one who died; catching a smell of perfume, or food cooking; hearing an old song; the death of a pet or another relative or friend.

Developmental issues can also trigger a return to the front of the spiral, especially for children — when a girl has to start junior high school without her mom; when a boy turns sixteen and realizes he doesn't have his dad to teach him how to drive; when a child reaches adolescence and begins to think about the whole world in a deeper way; when a young girl joins the Girl Scouts without her older sister to lead the way; when the surviving parent begins to date. Any or all of the feelings of grief can come pouring back into the lives of children or adults years after the death occurred, sometimes with an intensity that's frightening.

"If you read the books or the magazines, everybody says you go through the phases of grieving, and you almost feel that when you come to a certain point that it should end. You've gone through all the steps — boom it's over, it's done with. But you realize that it's never over. It's an ongoing struggle. A lot of days are better than most. A lot of days are worse than others. You're continually blazing a new trail."

When someone we love very much dies, it feels like everything in our lives has changed. And our lives truly have changed. Grief is about figuring out what our new life is now that the person has died.

Understanding the road of grief as a spiral can help us to anticipate what might be coming, and to understand the changes that occur. It can allow us to begin to manage our grief, and to organize our experiences.

Instead of convincing ourselves that we're getting over our grief at the first sign of movement towards the back of the spiral, we can realize that this softening of intensity is not forever. And when we spiral back around to the front, we don't need to be frightened that we're right back at the beginning, that we haven't learned anything in managing our grief. Realizing that the grief will follow a spiral path can lessen our anxiety, since coming around to the front again doesn't devastate us because we have some anticipation of it.

As one father at the Caring Place told us: "It has been a number of years since my son died. I don't live in the difficult days of the beginning anymore, where I was just trying to hang on, where it took all my energy just to put one foot in front of the other and get through the day. Things aren't as difficult now. But I know that at any moment, that grief can swing around and smack me full in the face again. It happens. And I deal with it in ways that I've learned to. I don't run from it. I use it as a way to remember Ian. And then the grief backs off. What I know about my life is that grief comes and goes. And knowing that, I'm not surprised when it comes around again."