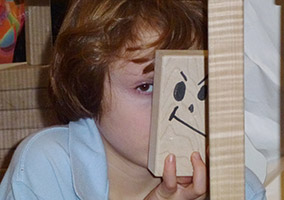 Children grieve differently than adults do. The younger the child, the less they have the ability to understand death and loss. They don't have the vocabulary to put the concepts into words, and are less able to deal with emotional pain. Children often have many questions after a death. What's important is the conversation that comes from the questions, the connection made with the child, rather than the answers. Even though we can't "fix" the child, we can support them, and hear them, and love them. In the confusing and overwhelming time of grief, our presence is more significant than our answers.

How do children grieve?

Not all that long ago, it was believed that children didn't really experience much grief when someone close to them died. It was believed that in their resilience, they went through a difficult time and then went on with their lives, finished with that chapter.

After some years of listening to children who have experienced a death, it's clear that children do grieve just as strongly as adults do, and in some cases have even more complicated grief than adults do.

Children grieve, but the younger they are, the more their grief looks different than the grief of adults.

Grief from preschoolers to teens

Even the youngest children can feel that something isn't right in a home in which someone has died. And their unease will find expression in various ways, picked up by those who know them best.

At the other end of childhood, the oldest teens will show signs of grief similar to the way adults grieve.

Very young children have their own stories of the deaths that have shattered their worlds. Though young children grieve as much as adults do, their grief is often masked because it looks so different from what we're expecting to see.

Children, especially younger children, don't have the understanding to grasp the basic concepts of death, including the fact that death is final, that it's universal, and that it's inevitable. Even with a growing understanding, they still may not have the vocabulary or the ability with words to be able to verbalize these intense, conflicting and complicated emotions and concepts. As children get older, they gain more ability with words, but feelings as big as those that come with grief can still be very difficult to talk about, even for teens.

"In times of stress, the best thing we can do for each other is to listen with our ears and with our hearts and to be assured that our questions are just as important as our answers."

— Fred Rogers, Honorary Chairman of the Caring Place from its inception until his death in 2003

Children are also less able to deal with emotional pain — they have a "short sadness span." They have a limited capacity to tolerate the intensity of pain, grieving in small pieces at a time. They can't take the full force of the loss all at once. Their grieving is very inefficient. They approach it, feel it, take it in, and then may go off and play. They'll touch the grief again for a brief time later when they're ready again.

Along with this, many children are sensitive to being different from their peers, so the last thing they want is to appear different in their feelings and reactions following a death. Many children are masters at hiding what's really going on underneath the surface.

As children grow and develop, the ways in which they react to a death will grow and develop as well. Preschool children often see death as an absence. They fail to comprehend the permanency of death.

Elementary-school-age children understand that the person who died is not ever coming back. However, they haven't yet developed the complex language to help them talk about feeling broken-hearted. At this age the children often reveal much anxiety over who will be available to take care of them.

Adolescents have a greater understanding of the meaning of the death for the future. They are often mourning what the relationship could have been as well as what that person meant to them in the present.

Connecting with a grieving child

Children who have had someone they love die may have many questions. No matter how old they are, it's not always easy to answer these questions — or sometimes even to hear them being asked.

But it's important to remember that no matter what the question, the conversation that results, the continued connection made with the child, is more important than the answer.

It's all right to allow the child to be sad, or upset, or "not OK." We don't have to feel that we need to "fix" the child. They need to travel their roads of grief just as we do.

Although we can't make everything all right for the child, we can support them, we can hear them, and we can love them. When a child asks a question or talks about the person who died, in our responses we can aim to create a situation in which the child feels safe enough to talk more, now and in the future, and to have the child know that we are there for them to talk to.

With all the different and intense feelings surging through a child in a time of grief, this can be a confusing and overwhelming time. Above all, it can be frightening. It's important to remember that our presence is more significant than our answers.